for VFX and Games. 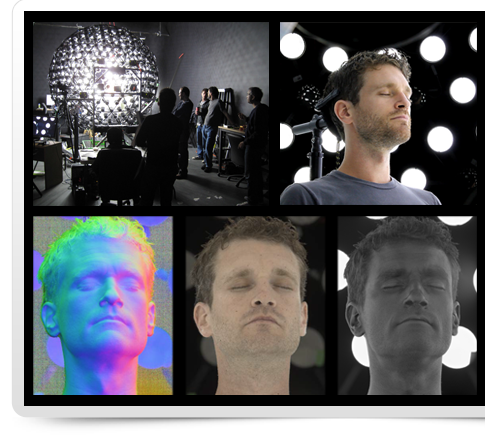 LightStage™ is a cutting-edge scanning technology that allows for the digital capture of the human face with unparalleled fidelity and scientific accuracy. LightStage efficiently captures how a subject’s face appears when lit from every possible lighting direction. From this captured imagery, specialized algorithms create realistic virtual renditions of the subject in the illumination of any location or set, faithfully reproducing the color, texture, shine, shading, and translucency of the subject’s skin.

For over a decade, LightStage scans have been the go-to for blockbuster films and AAA game titles alike. Co-created by LightStage CTO Tim Hawkins, the technology behind LightStage is based on original research at the USC Institute for Creative Technologies. In 2008, OTOY licensed the technology for commercial use and opened the LightStage capture facility in Burbank, CA. LightStage won a Scientific and Engineering Award from the Academy of Motion Picture Arts and Sciences, that cited its “ability to capture high fidelity reflectance data of human subjects, allow[ing] for the creation of photorealistic digital faces as they would appear in any lighting condition.”

Scan data cleanly separates the diffuse and specular components of the skin, as well as, highly detailed normal information.

Artist-friendly mesh lets you tweak the basic geometry of your characters.