Beeple and OTOY to re-imagine next generation digital art and technology through OTOY’s OctaneRender software and the RNDR blockchain network.

LOS ANGELES, CA – May 18th, 2021 Building on a trailblazing decade of close collaboration, OTOY and Beeple today announced that the groundbreaking artist will be joining OTOY and RNDR’s Advisory Board to help develop the next generation of NFTs and digital media on the RNDR blockchain network. The creator of the historic The First 5000 Days auction sold at Christie’s in March, will be joining the company’s Advisory Board along with the board of RNDR, OTOY’s blockchain GPU compute and 3D marketplace.

On the OTOY and RNDR Advisory Boards, Beeple will join leaders in the media and technology industry – including J.J. Abrams, Ari Emanuel, and Brendan Eich – to help define the future of digital content creation and the next generation of blockchain NFTs (Non Fungible Tokens). 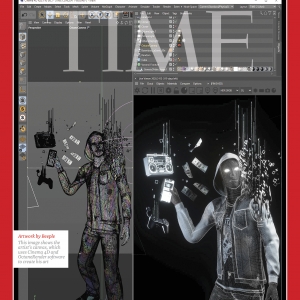 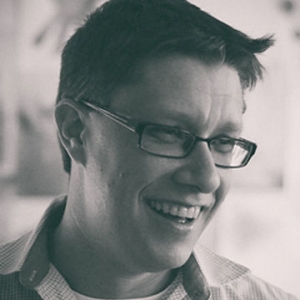 Over the past decade, Beeple has used OTOY’s OctaneRender to create most of the ‘everyday’ renders featured in The First 5000 Days, harnessing the industry’s first and fastest GPU accelerated renderer to create daily renders from a home workspace – for the first time – at a level of quality on par with a Hollywood studio.

OctaneRender and the RNDR blockchain network are now used by thousands of the leading 3D crypto artists – with over half a billion dollars in primary and secondary market sales – to create NFTs that are transforming how independent artists develop their careers and democratizing digital art creation.

In his work on the OTOY and RNDR Advisory Boards, Beeple will be bringing his lifetime of art to RNDR, helping to design a new form of NFT that creates a living archive of his creations. The collaboration will focus on developing the first blockchain NFTs (non fungible tokens) that are fully immersive on holographic displays and mobile AR, and are validated using deep forms of authentication on the RNDR blockchain network. The Beeple archive will be accessible through an X.IO RNDR storefront, controlled by the artist, that leverages OTOY’s full stack of capturing, rendering and streaming services made available through a RNDR API. 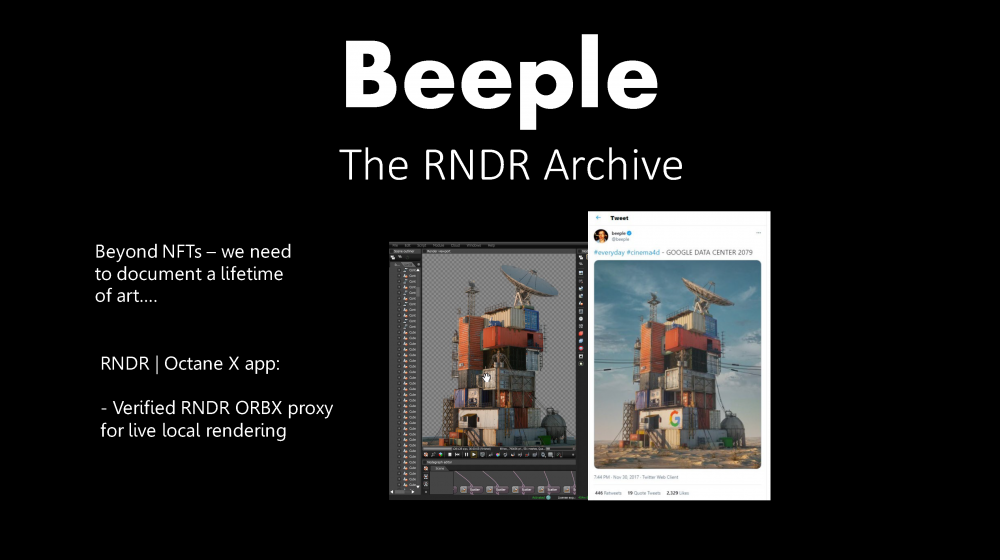 NFTs from the Beeple archive will be validated on RNDR through the same OctaneRender scene file that is used to create the original artwork in the NFT. The works are verified using the underlying rendering work used to produce the NFT, eliminating energy inefficient computational waste, and are minted using Layer 2 blockchain technologies with carbon offsets, providing a clean carbon negative creation pipeline. With both final renders and ORBX scene files minted as NFTs, RNDR NFTs are interoperable in virtual worlds, ‘future proof’ for mobile AR and fully immersive holographic displays, and remixable with deep chain of attribution needed for advanced forms of digital rights management (DRM). 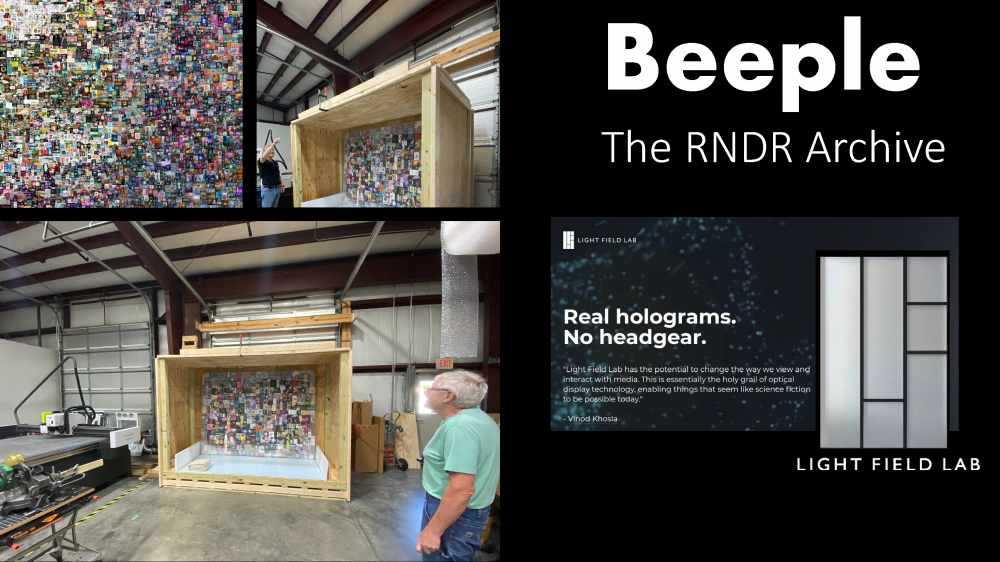 Said OTOY and RNDR CEO, Jules Urbach, “Our mission has been to democratize state of the art 3D content creation. For the past decade we have been inspired by how Beeple has used OctaneRender to create everyday renders that transformed the digital art landscape, and over the past year, we have been thrilled to see OctaneRender artists use RNDR and blockchain NFTs as a new way to connect with their fans and sustain their careers, independently.”

Urbach added, “A pioneer of digital art and one of the leading creative voices of our generation, we are thrilled to add Beeple to our Advisory Board to help us push NFT technology forward, advancing the state of the art of digital content creation and our digital economy.’ 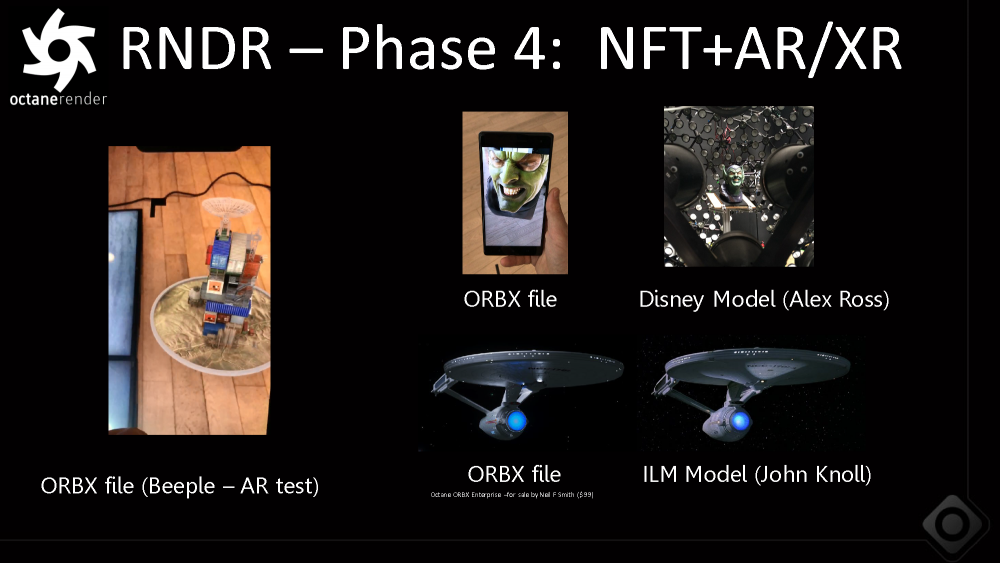 NFTs created in the Beeple archive will be registered on the Ethereum blockchain using OTOY’s RNDR and X.IO streaming technologies and available at Beeple.x.io. The Beeple archive on RNDR will leverage OTOY’s Academy Award winning suite of 3D capture, rendering and streaming technologies, including integrations with over 20 of the industry’s leading 3D content creation tools, and the first native GPU path-tracing on Metal for macOS and iOS, which was unveiled earlier this year.

The announcement was previewed at NVIDIA’s GPU Technology Conference (GTC) where Jules Urbach presented a comprehensive vision for the future of NFTs and blockchain computing technology, and showcased plans for the Beeple archive.