At Creation Las Vegas, the Roddenberry Estate presented the first real-time interactive and fully immersive previews of the Roddenberry Archive, a multi-decade collaboration to preserve Gene Roddenberry’s lifetime of work for future generations to experience in next generation media formats. 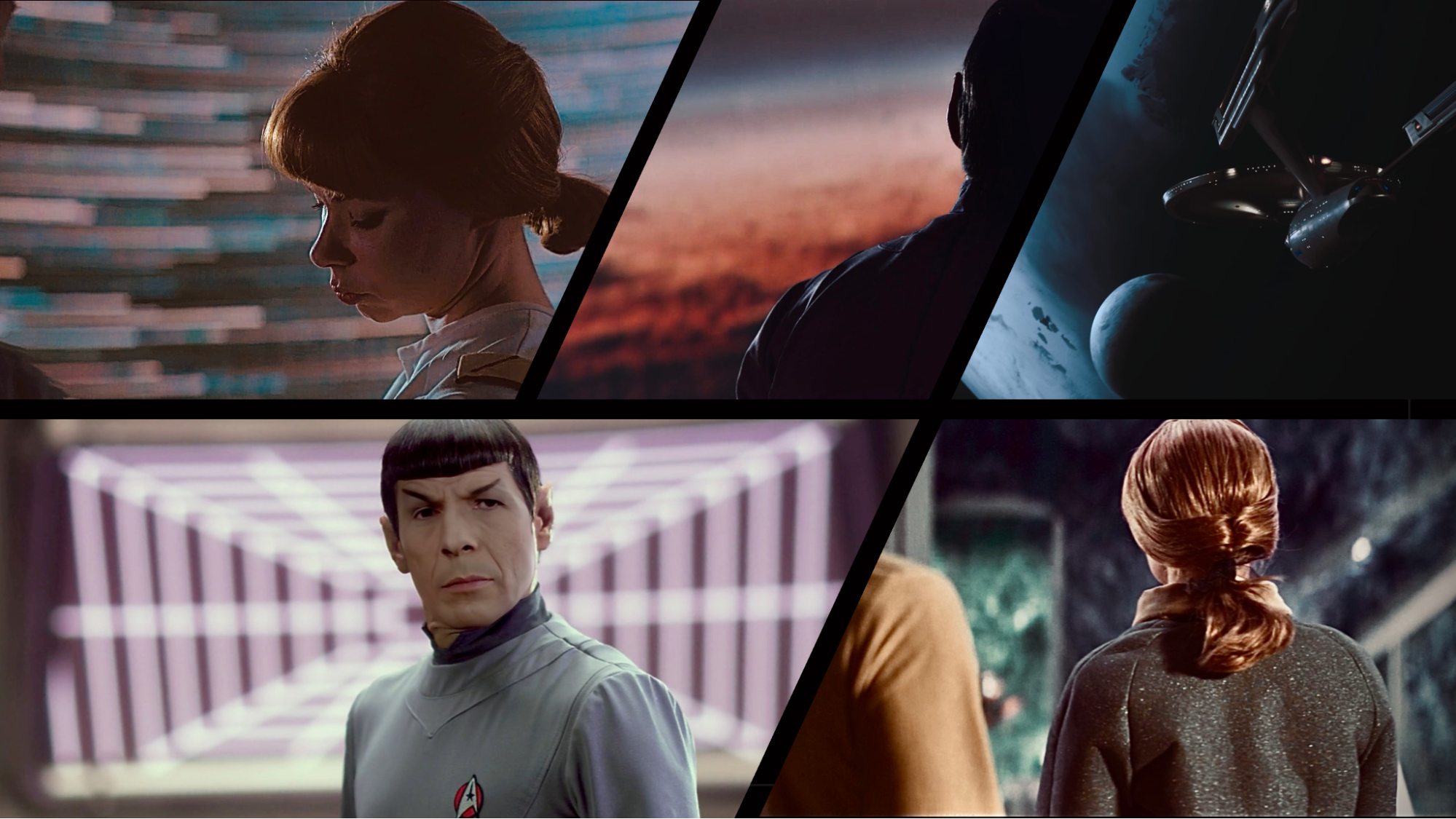 After announcing the Roddenberry Archive during Gene Roddenberry’s centennial in August 2021, and, in May, sharing a preview of the nearly completed work archiving the Gene Roddenberry’s 1964 Star Trek pilot “The Cage”, OTOY Inc. and the Roddenberry Estate made good today on a promise to let Star Trek fans start to explore the archive’s ever growing massive 3D datasets during its first year of production – bringing the archive’s life-size digital recreation of the original Starship Enterprise for fans to experience at Creation: Las Vegas 2022.

The 1:1 scale assets in the archive include both a production version (for physical assets filmed in the real world for TV or film) and a second “in-universe” version that works just as the item or ship might inside its narrative universe. The work is intended to preserve the important history of Gene Roddenberry’s work, including Star Trek, for new holographic mediums for future generations to experience Gene Roddenberry’s legacy with the highest levels of immersion and historical fidelity.

At the Roddenberry Archive Interactive Exhibit, OTOY and Roddenberry Entertainment are enabling fans to jump in to the history of Star Trek right from where it all began – with the “The Cage” experience, where they can explore the Starship Enterprise created by Gene Roddenberry for the initial pilot of Star Trek from 1964.

Recreations of “The Cage” were supervised by original director Robert Butler in March. The archive is curated and overseen by preeminent Star Trek cast and crew including Denise and Mike Okuda, authors of Star Trek: The Encyclopedia, and renowned Star Trek Visual Effects artists Doug Drexler and Daren Dochterman. 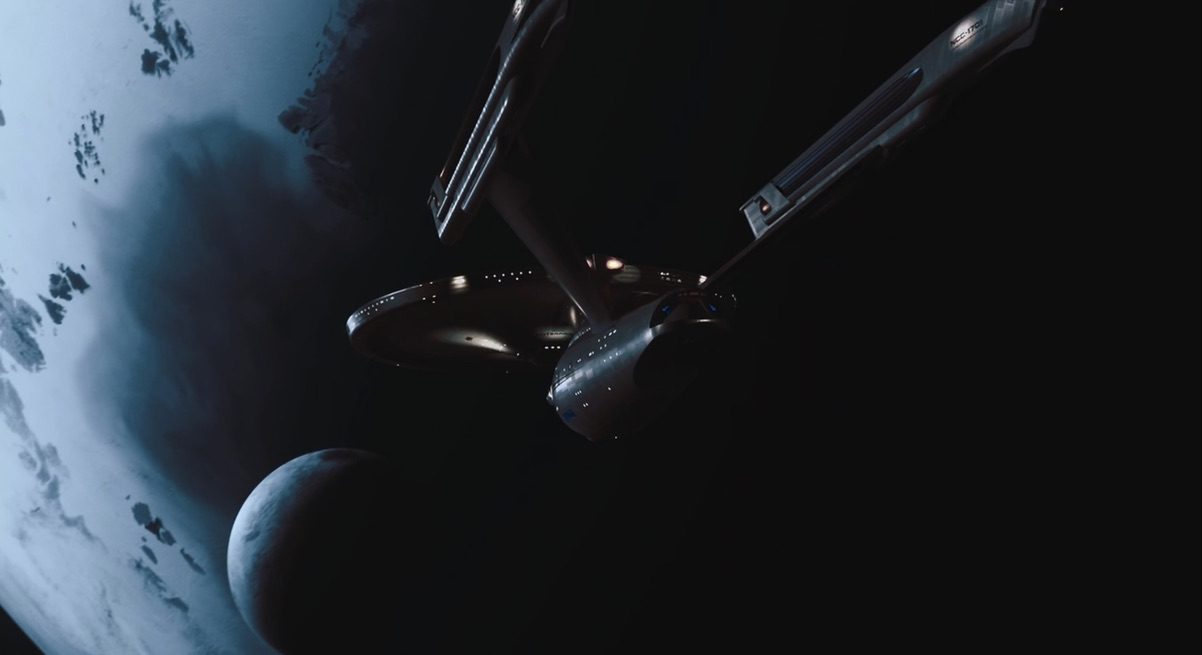 The fully immersive, interactive 360-degree experience allows fans to navigate through every filmed location of the Starship Enterprise as shown in “The Cage”, and interact with the ship’s environment as if they were on board the actual ship in the year 2254 during that episode. Fans can sit in Captain Pike’s chair on the bridge, explore the memorabilia in his quarters, use the turbolift to go to different levels, flip through Spock’s presentation of Talos IV in the ship’s briefing room display, and use the transporters to beam in and out of the ship (upon entering or exiting the experience). 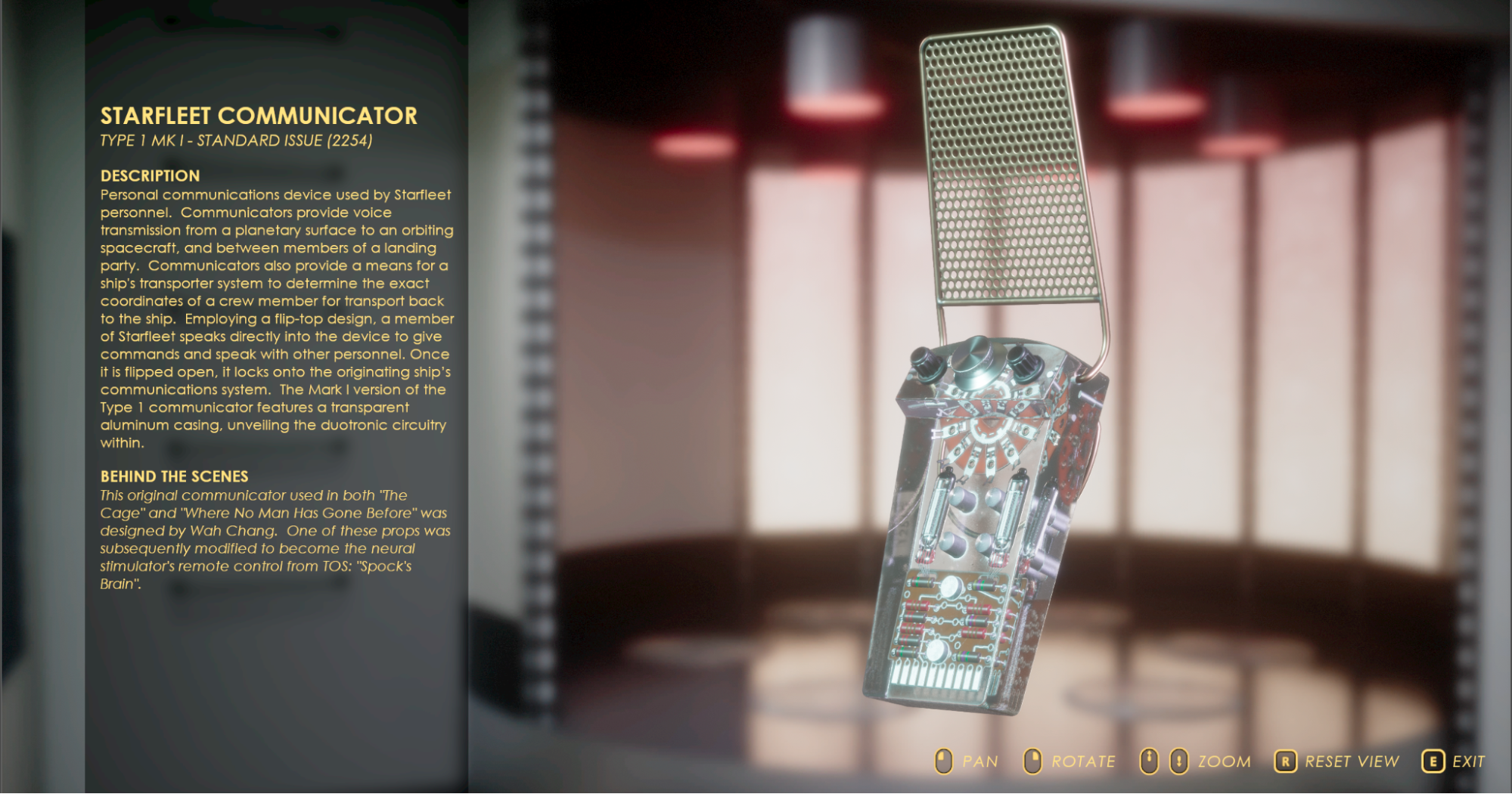 The main stage panel, moderated by Gates McFadden, Dr. Beverly Crusher in Star Trek: The Next Generation and Star Trek: Picard, OTOY’s Founder and CEO, Jules Urbach, Rod Roddenberry, President of Roddenberry Entertainment, Denise and Mike Okuda, and Daren Dochterman discussed the past year of work on the Roddenberry Archive and where it was heading in 2023. 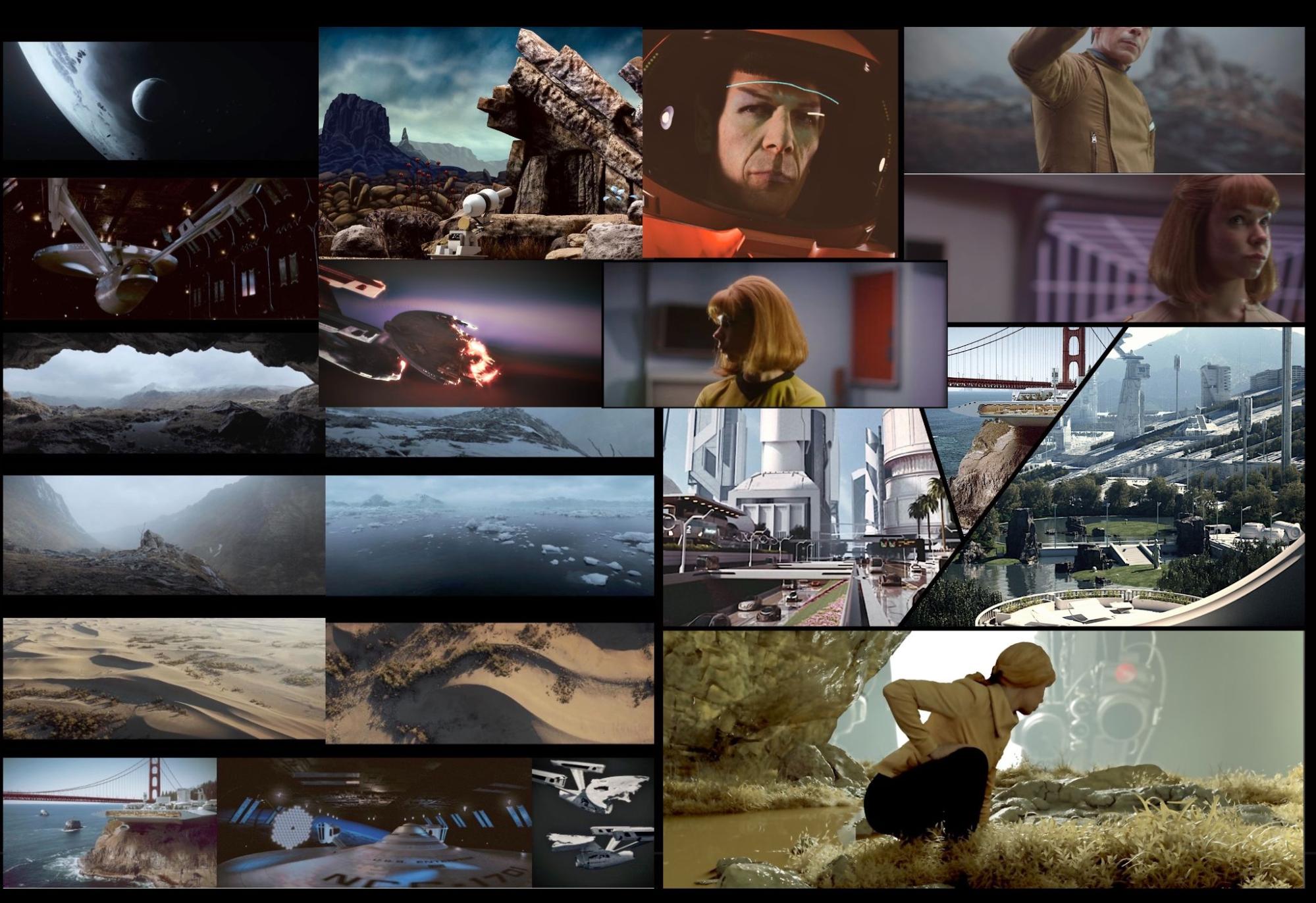 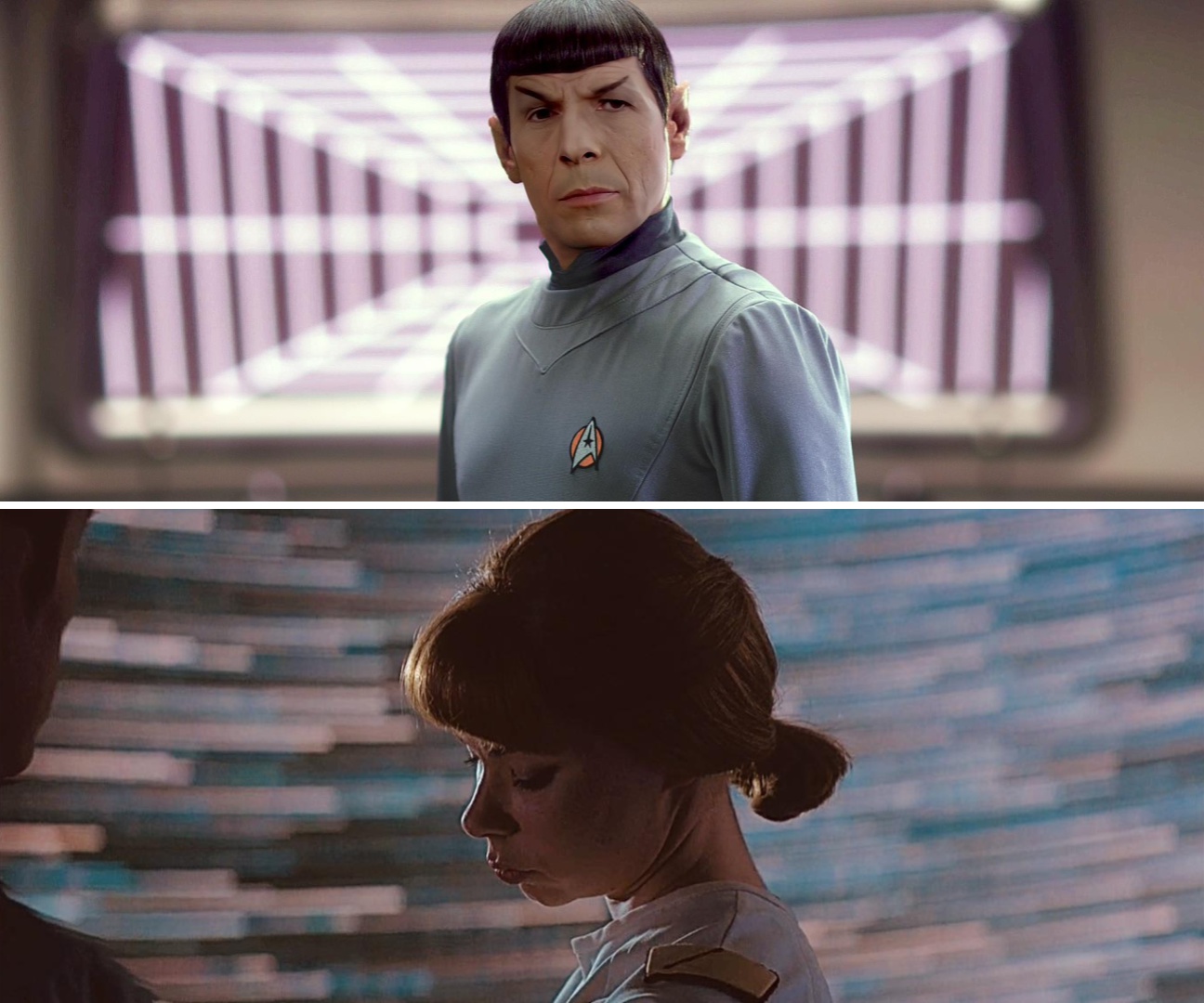 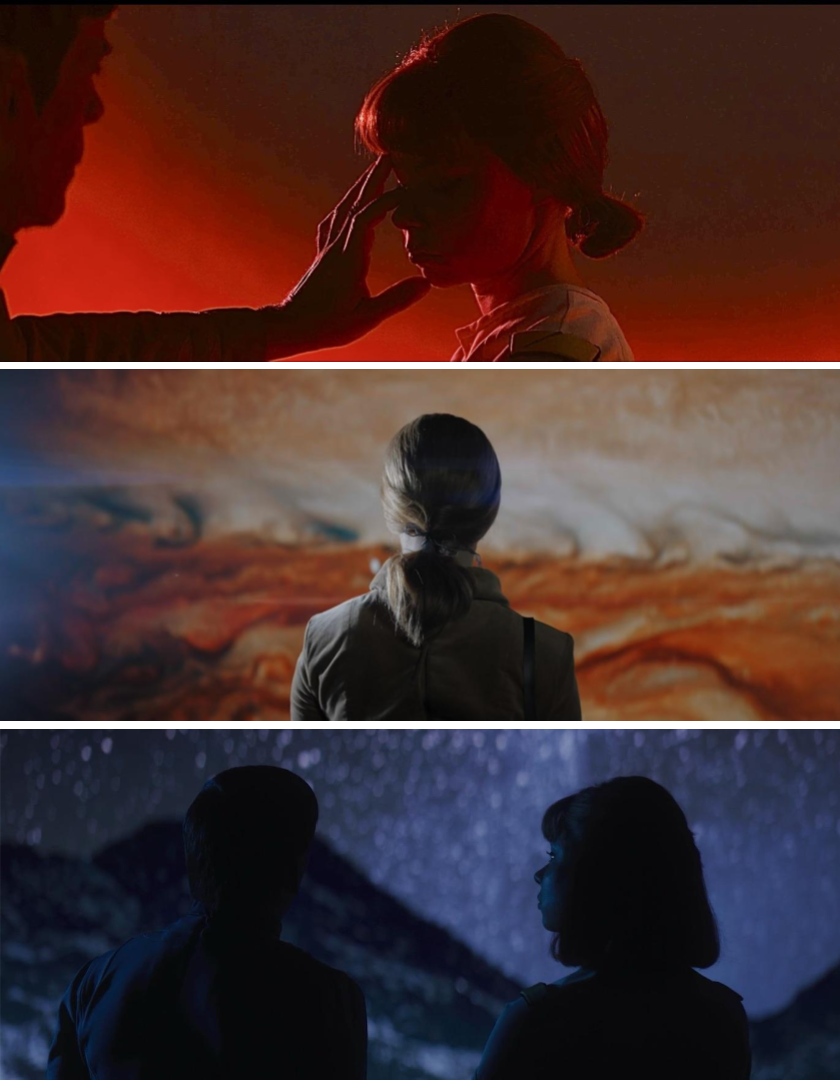 Fans were shown a never before seen Roddenberry Archive concept video made just for the panel: “765874: Memory Wall”, a follow up to May’s earlier “765874” teaser that accompanied the Cage preview. 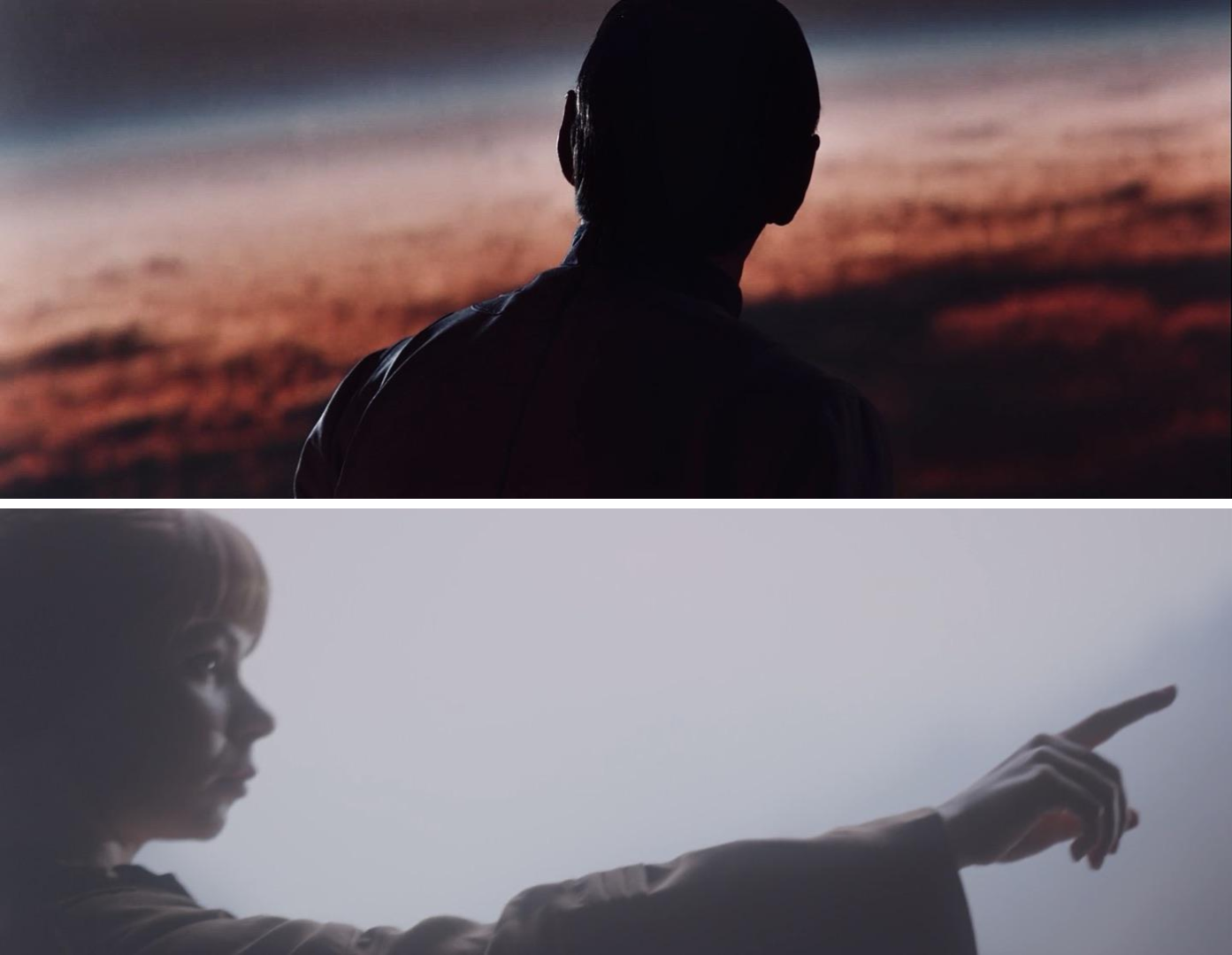 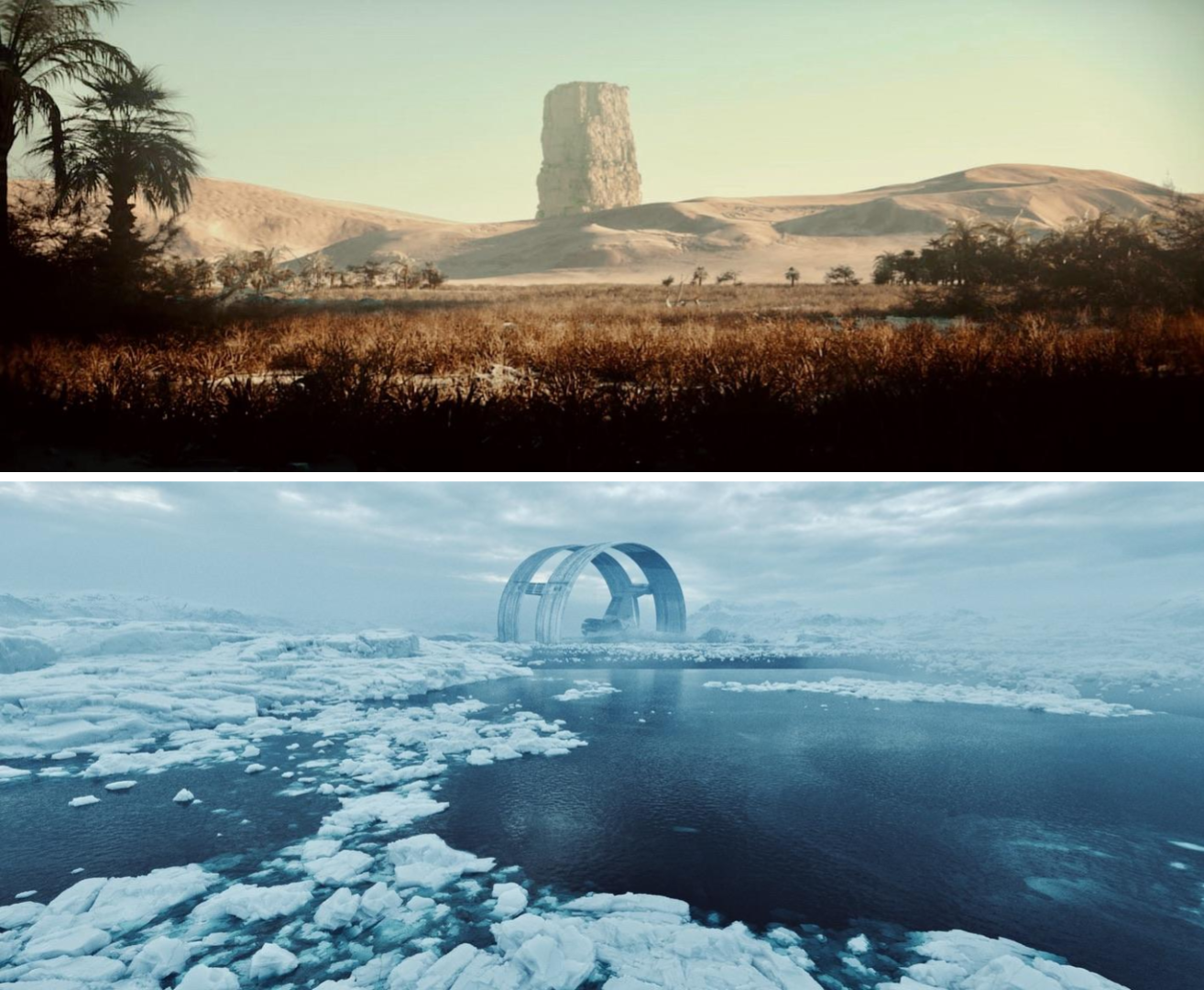 Both videos explore ideas and concepts coming from the unfilmed history of Star Trek and Gene’s other works – including Gene’s 1970’s ideas for Star Trek: Planet of the Titans, Star Trek: Phase II and the larger literary universe that followed Gene’s Roddenberry’s first and only Star Trek novelization of the 1979 Star Trek: The Motion Picture, including novels and materials from Pocket, IDW and others that expanded the story of Colt and other Cage characters. 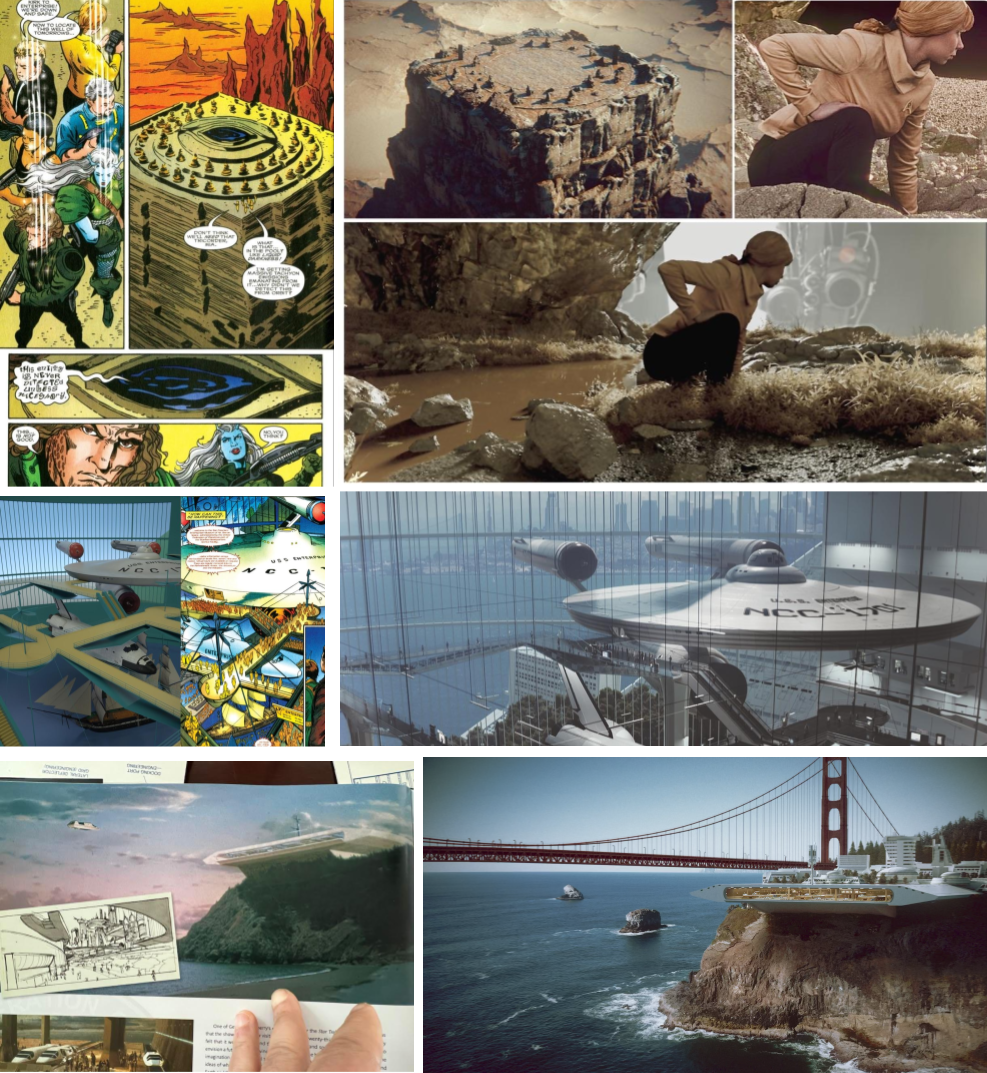 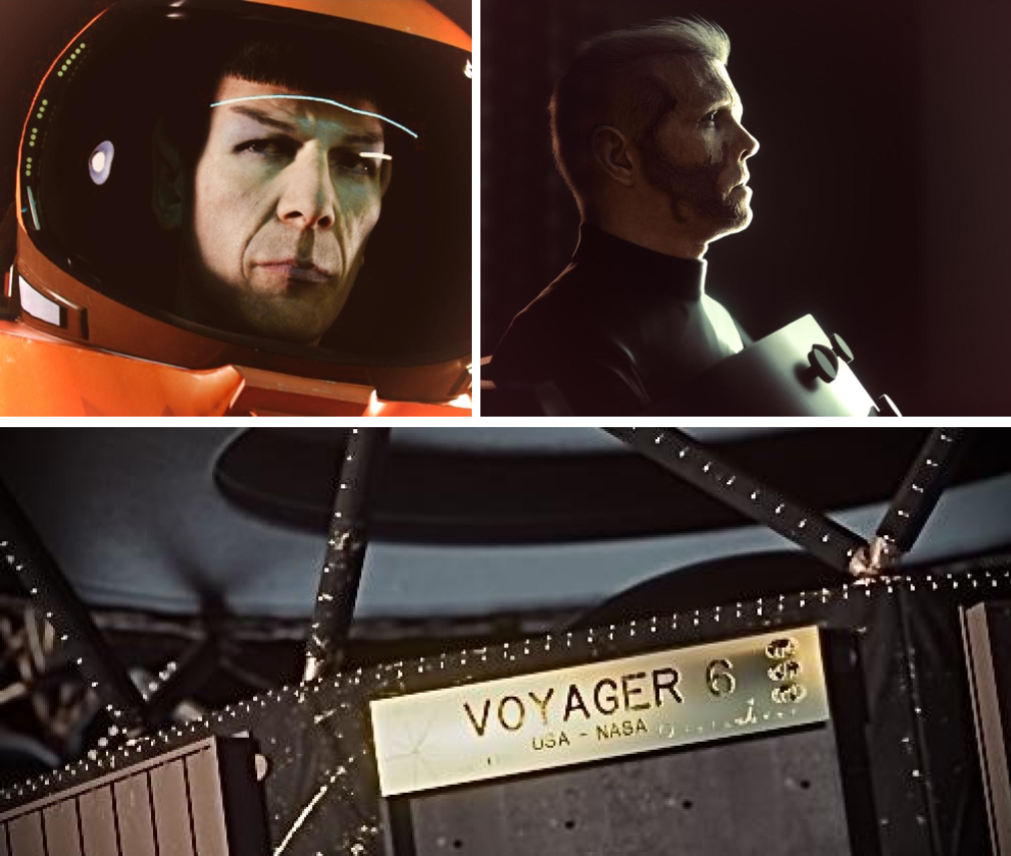 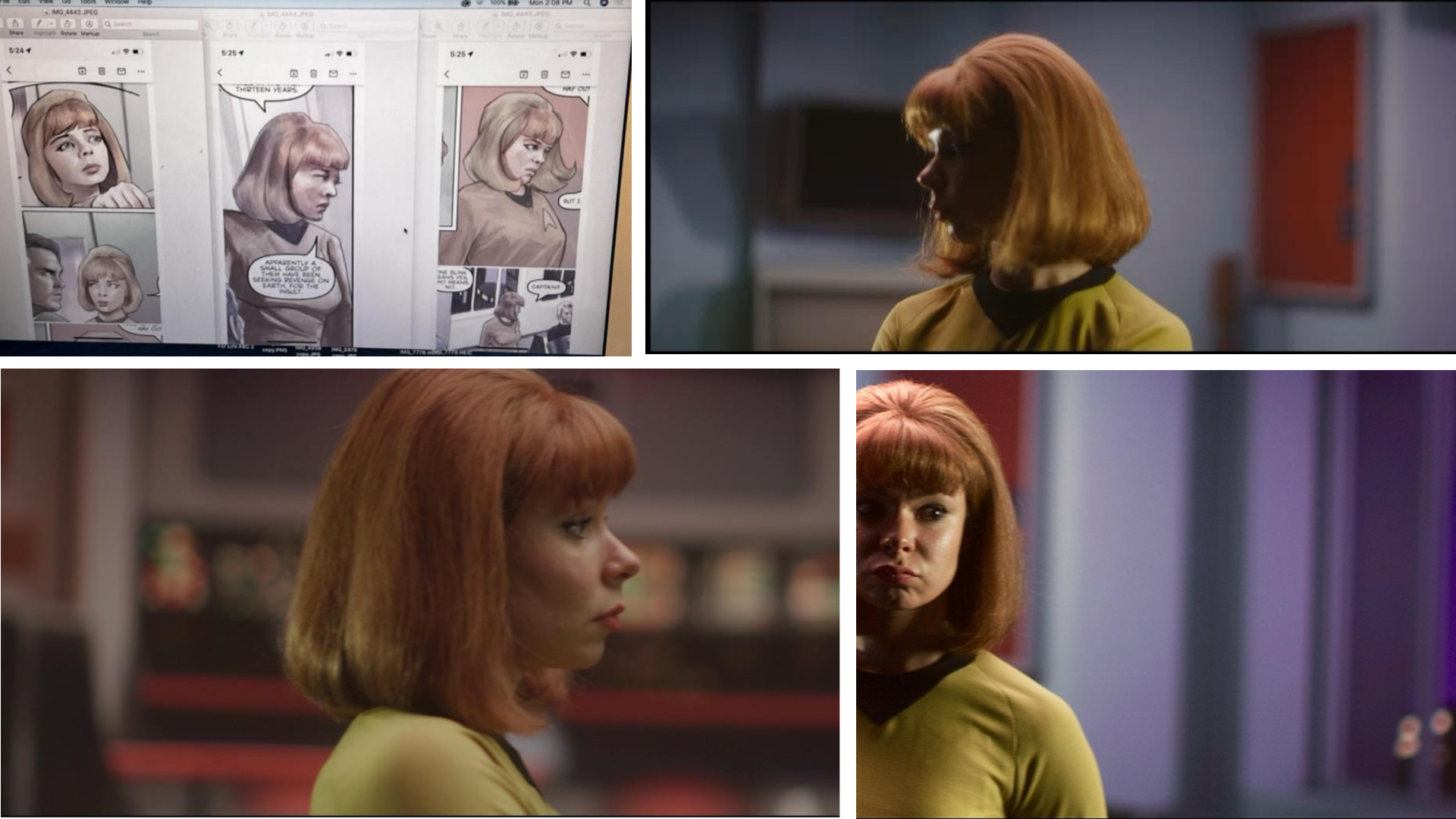 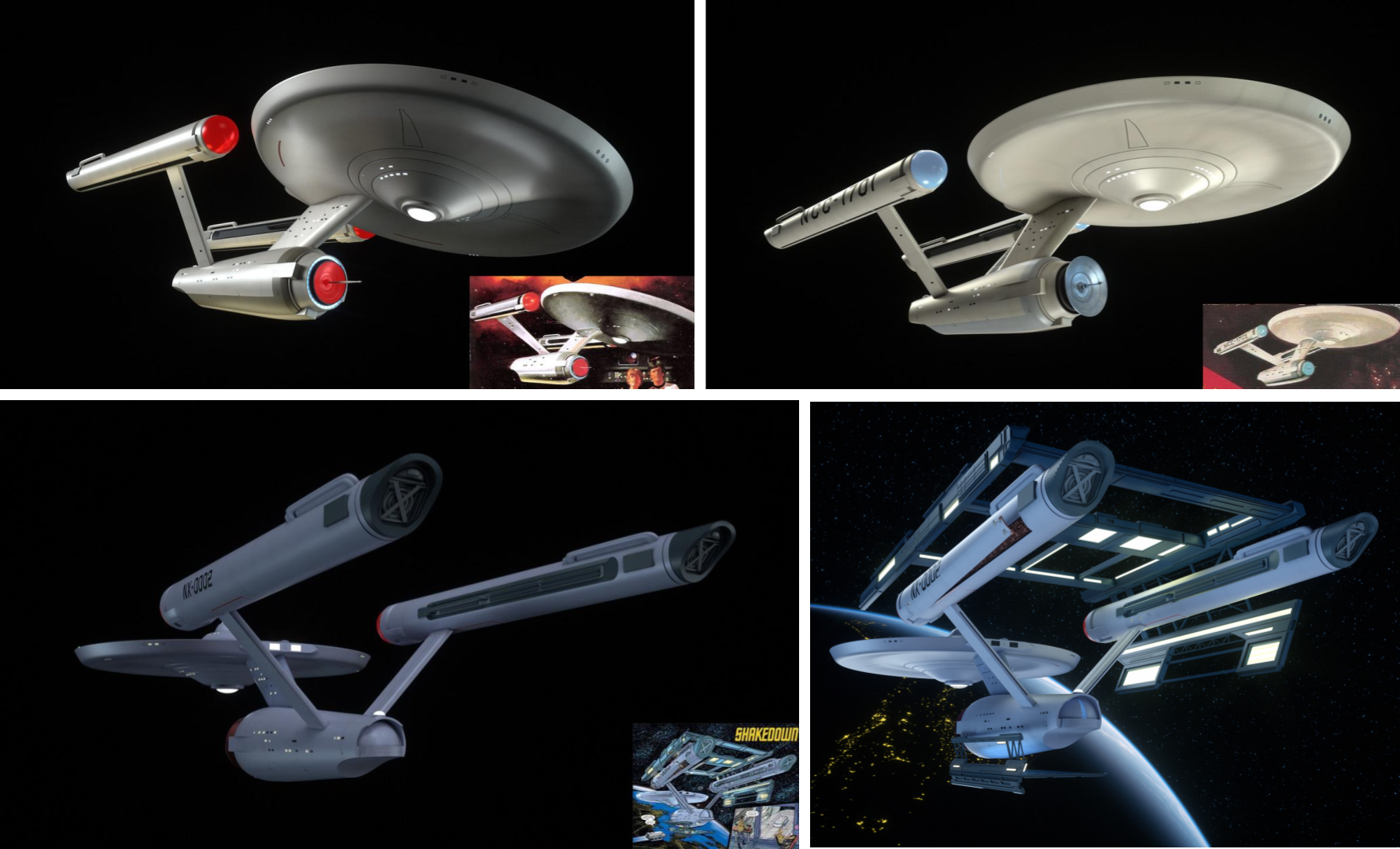 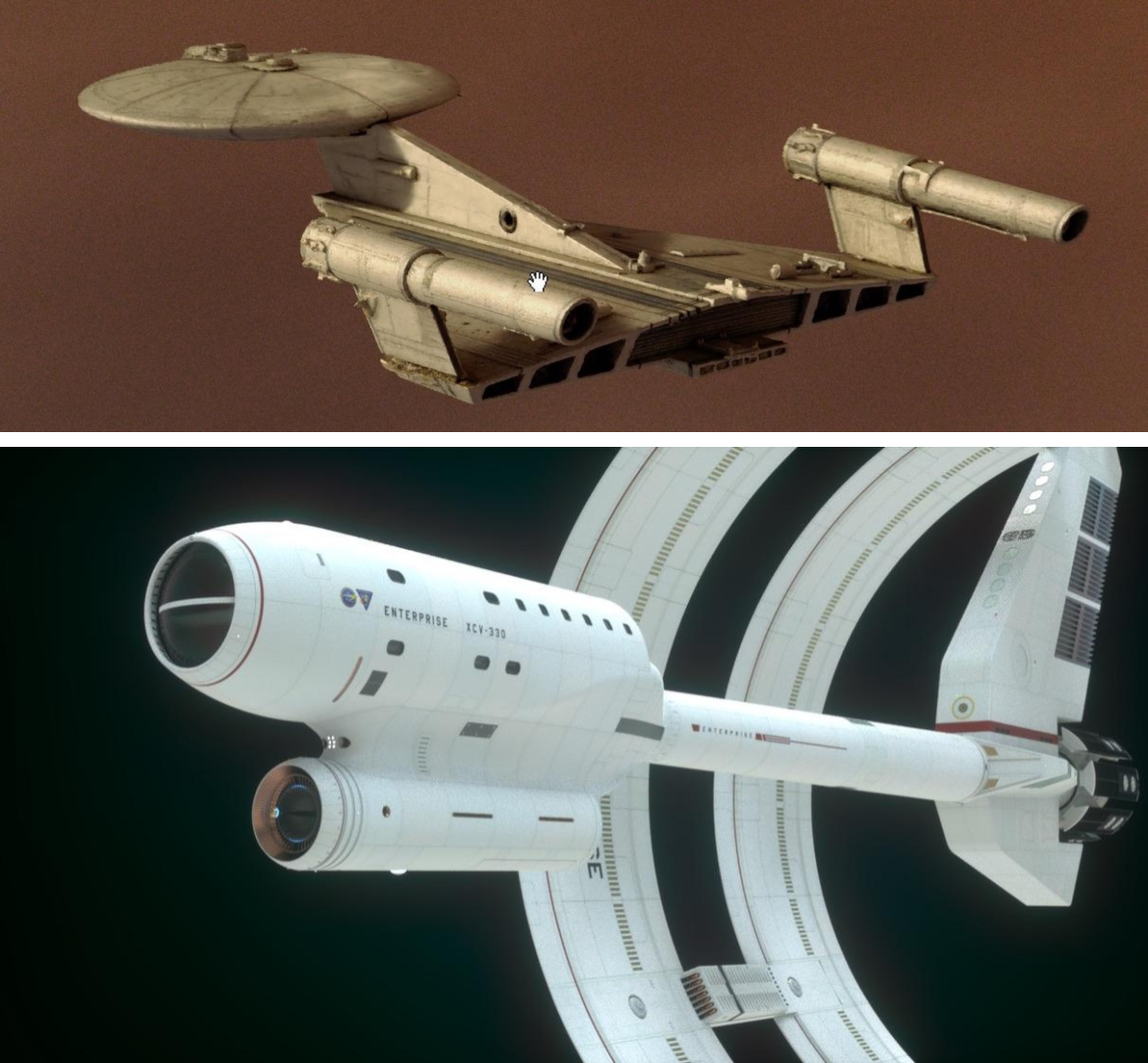 Above: The Enterprises of myriad timelines and realities as imagined through literary works by Roddenberry, John Byrne and others 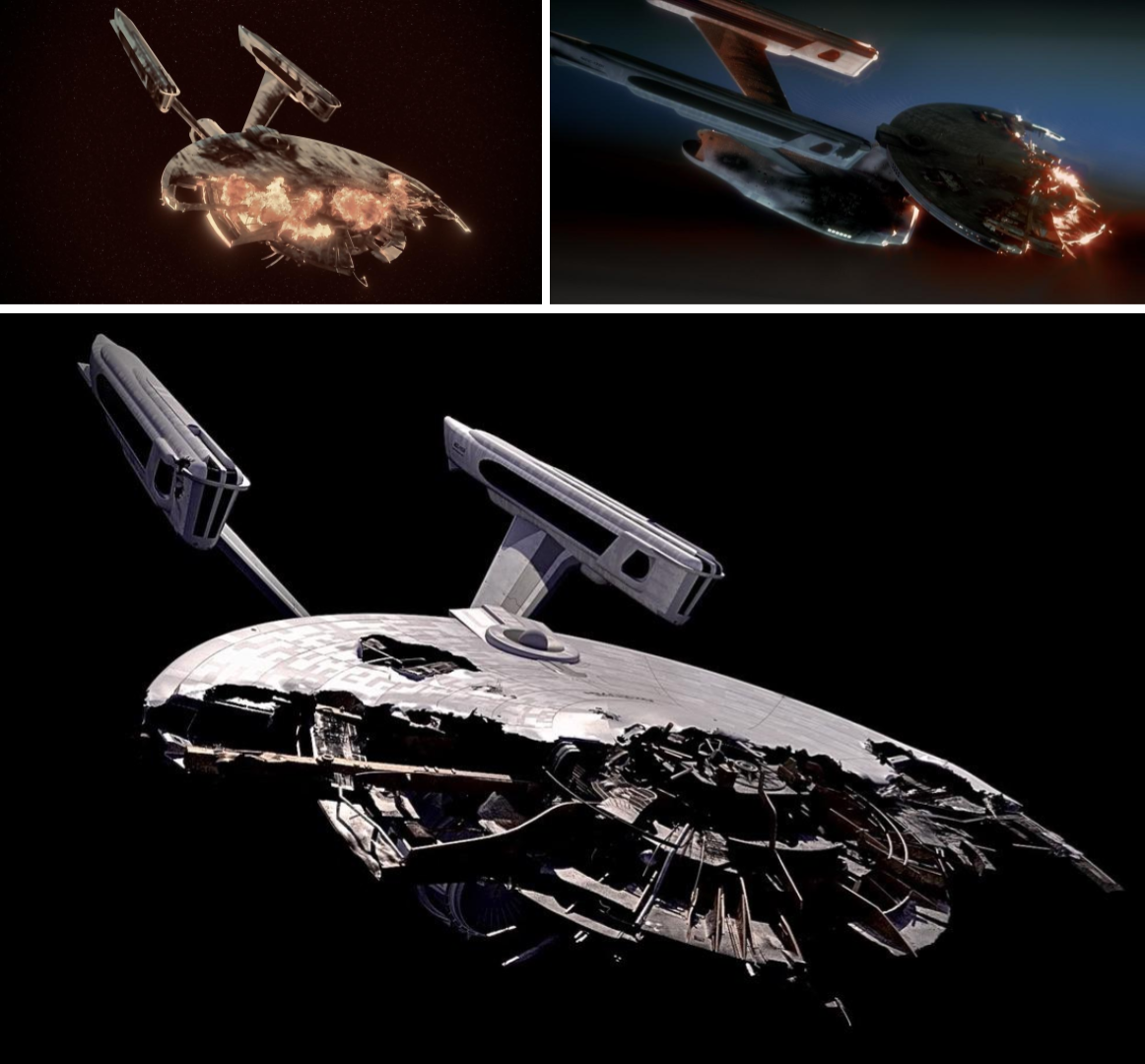 Above: Final fate of the original USS Enterprise (c. 2285) 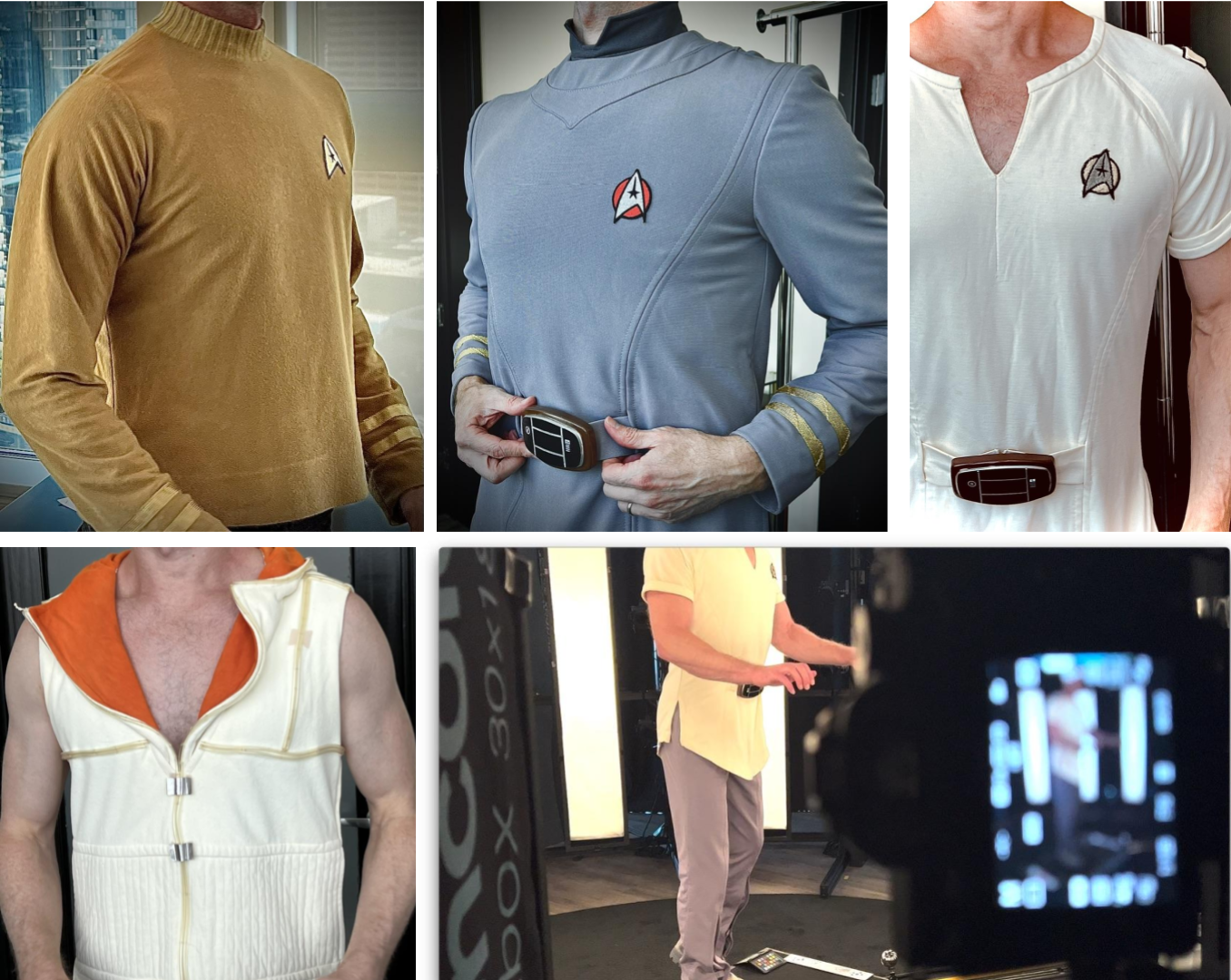 Actors Mahé Thaissa and Lawrence Selleck portray The Cage’s Yeoman J.M. Colt and Mr. Spock respectively for the archive. Both characters were created by Gene Roddenberry at the inception of Star Trek in his very first draft for the show (“Star Trek is..”) in April 1964. Along with Number One (portrayed by Majel Barret Roddenberry) they later appeared in the first Star Trek’s Pilot.

The performers wore meticulously recreated costumes, makeup and prosthetics, to reflect their character’s evolution through key “in-universe” periods of Star Trek history as it was fleshed out by Roddenberry during the 60’s and 70’s: the Cage (1964), Where no Man has Gone Before (1965), The Man Trap (1966), The Menagerie (1967), The Animated Series (1972) and finally the Motion Picture (1979). 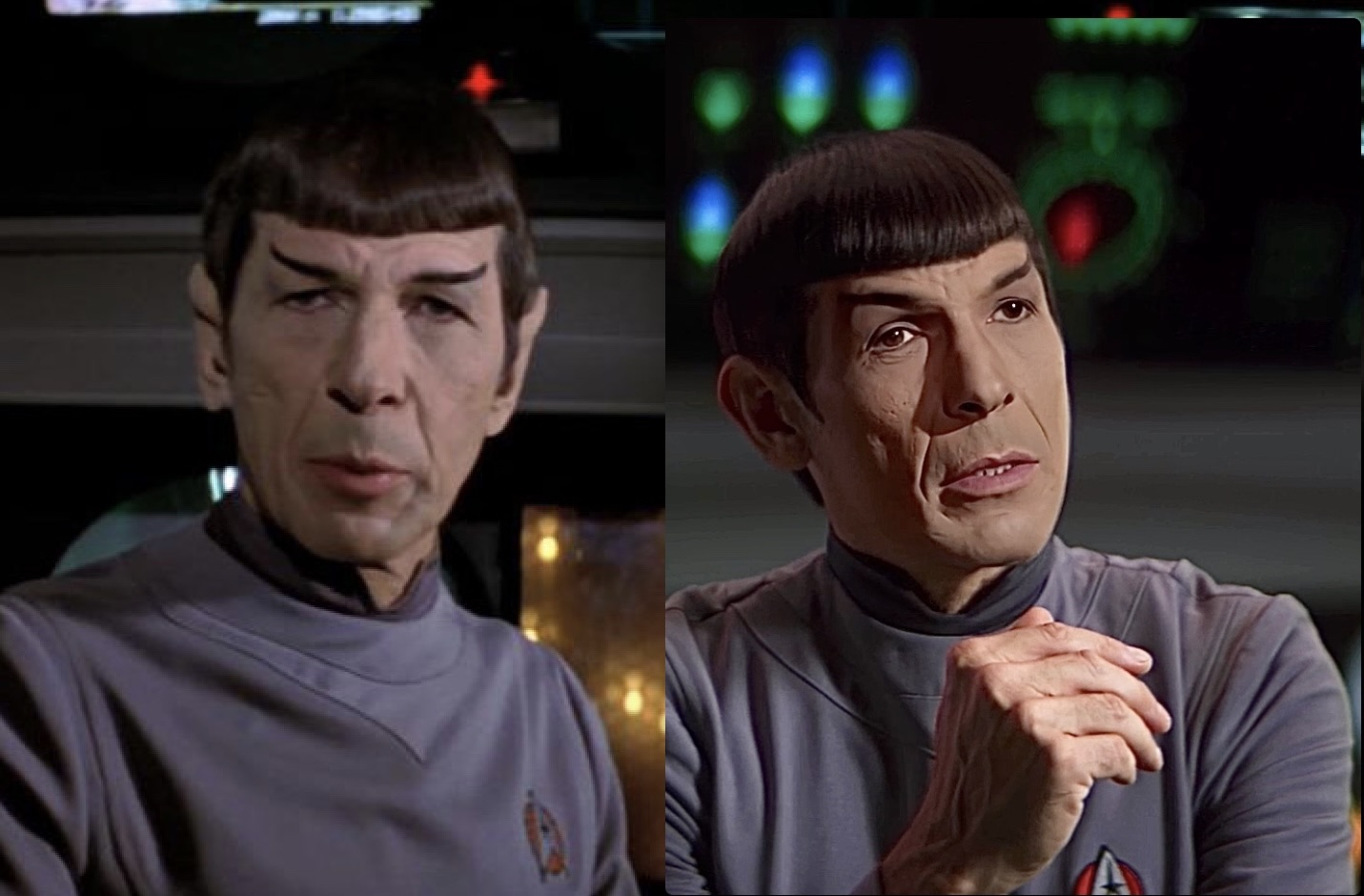 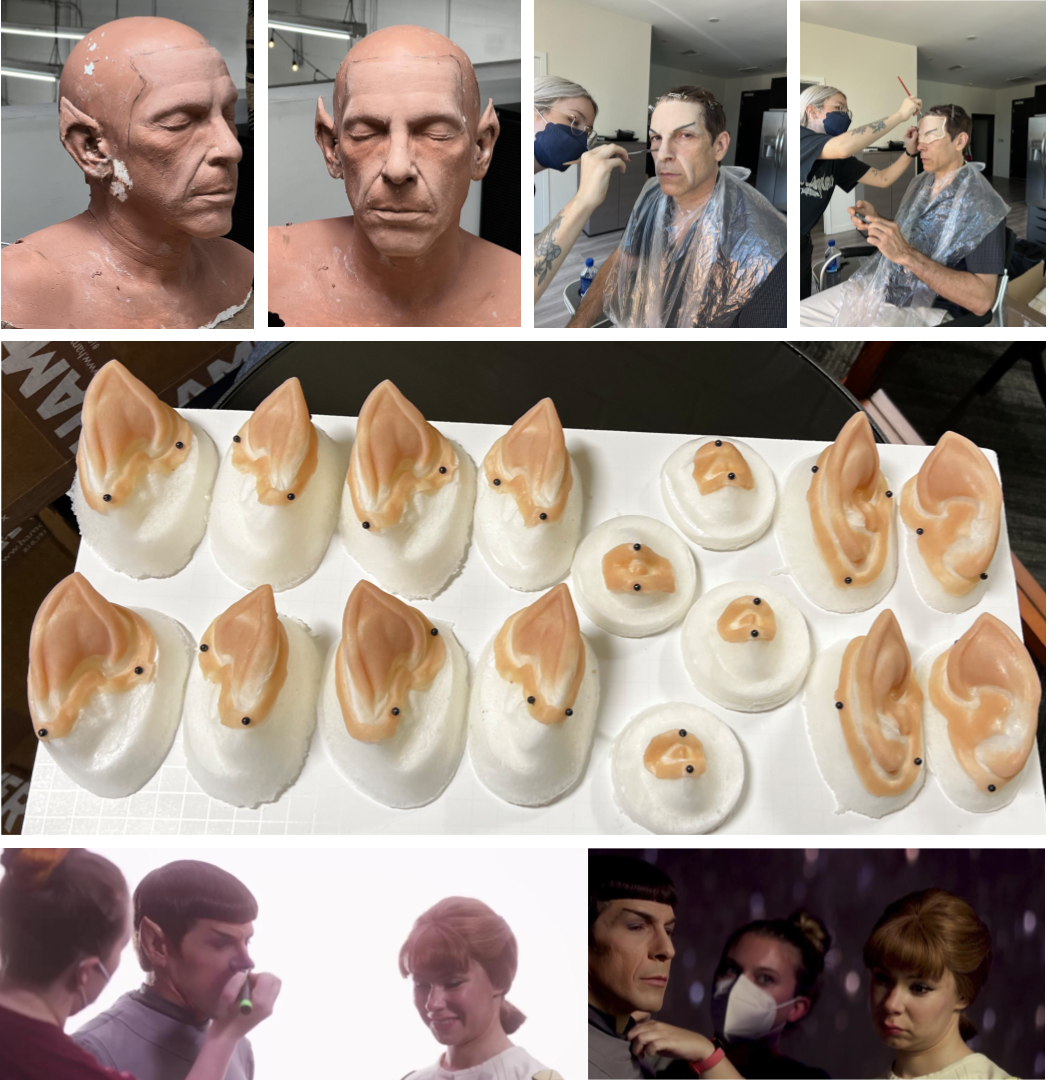 Above: L. Selleck makeup and prosthetics work for archive test shoot in August 2022

Above: L. Selleck screen tests blending TV and movie portrayals for an “in-universe” version of Mr. Spock as he might have appeared in the early 2270’s 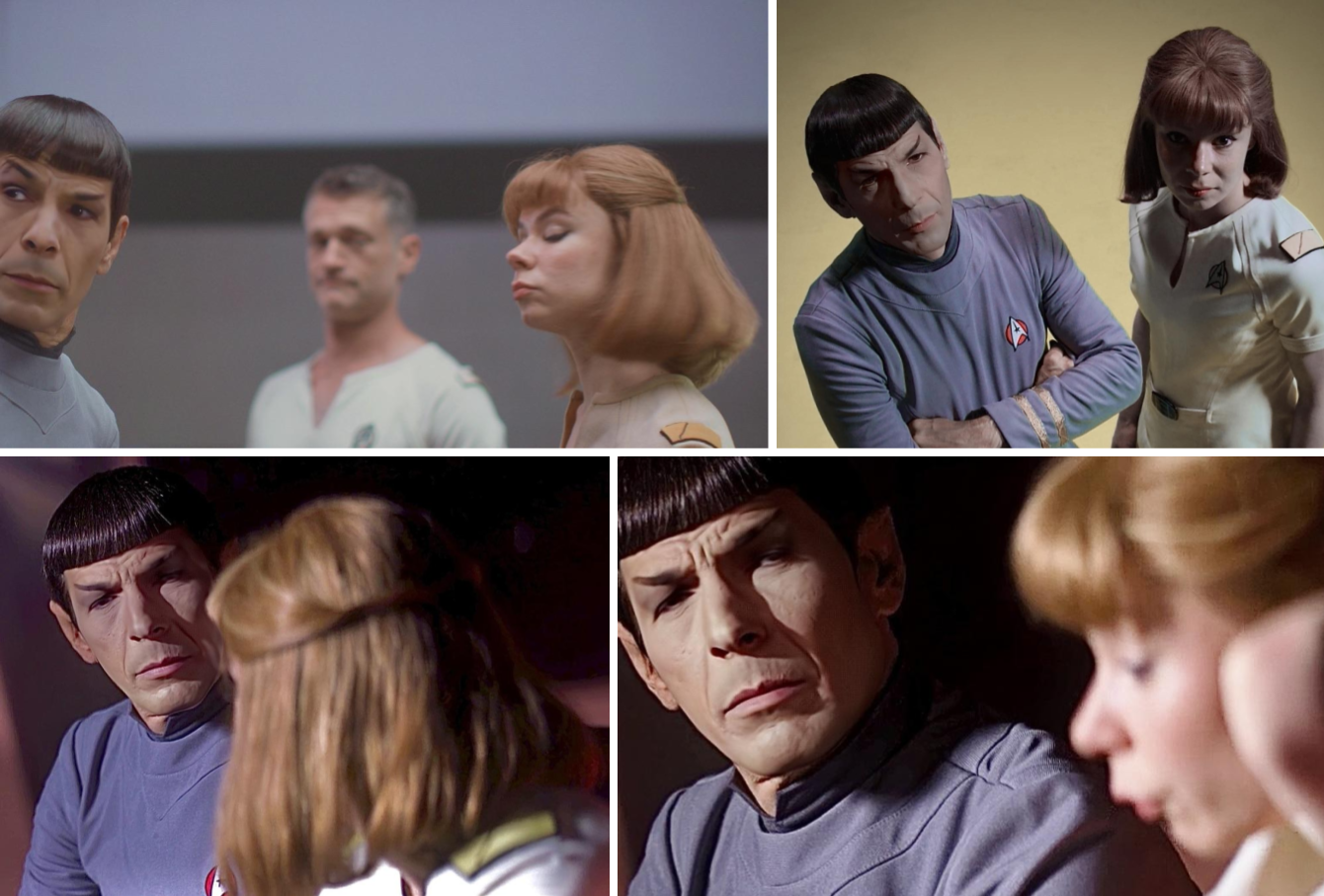 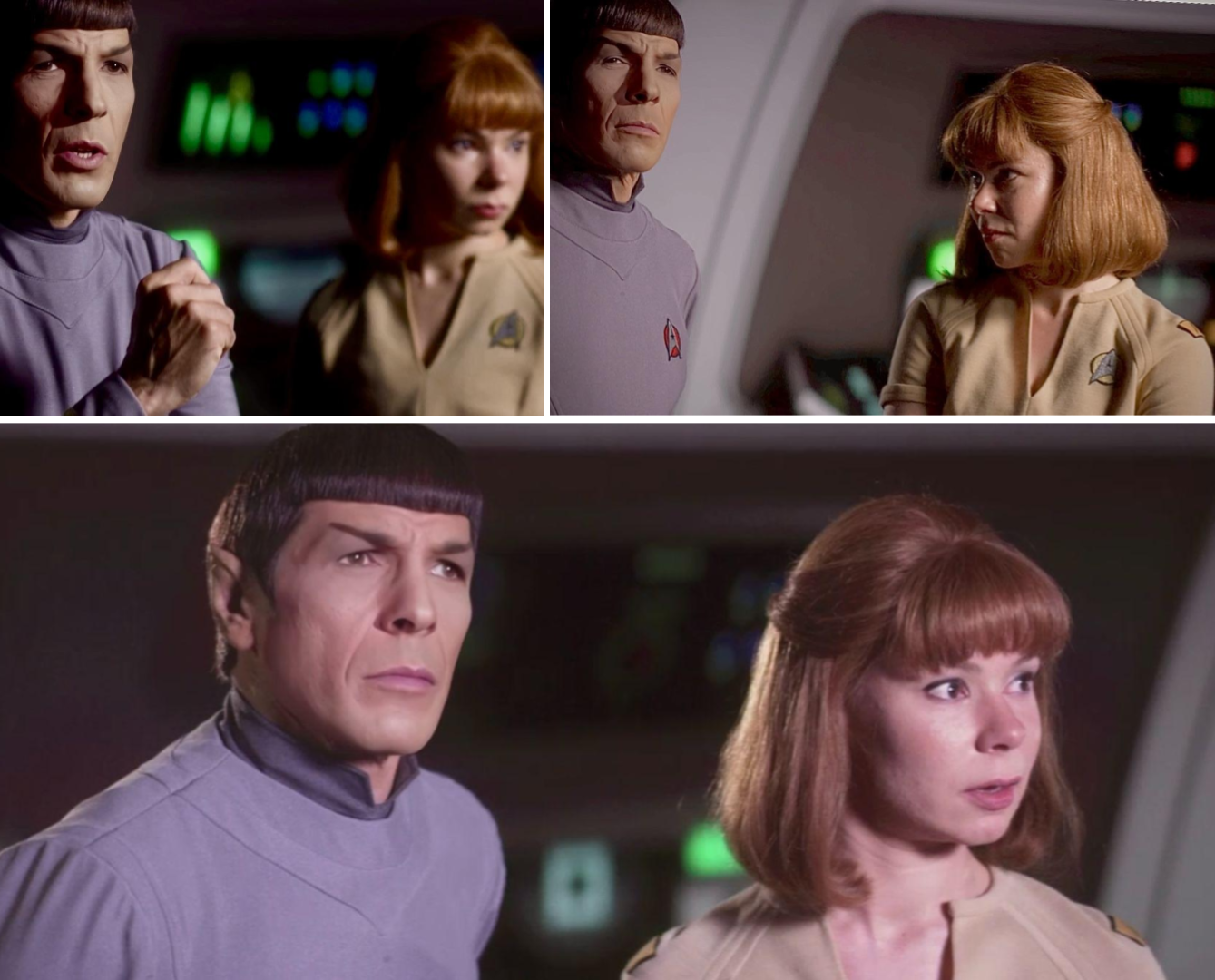 Above: Lawrence Selleck and Mahé Thaissa as Spock and Colt (c.2270’s / ST:TMP novel)

Rod Roddenberry closed the panel by sharing with fans an experimental technical test commissioned by Roddenberry Entertainment demonstrating how such technology might one day be used to remaster the 1972 Star Trek animated series as a live-action TV show with full visual continuity to the original three seasons of the 1960’s Star Trek TV show. 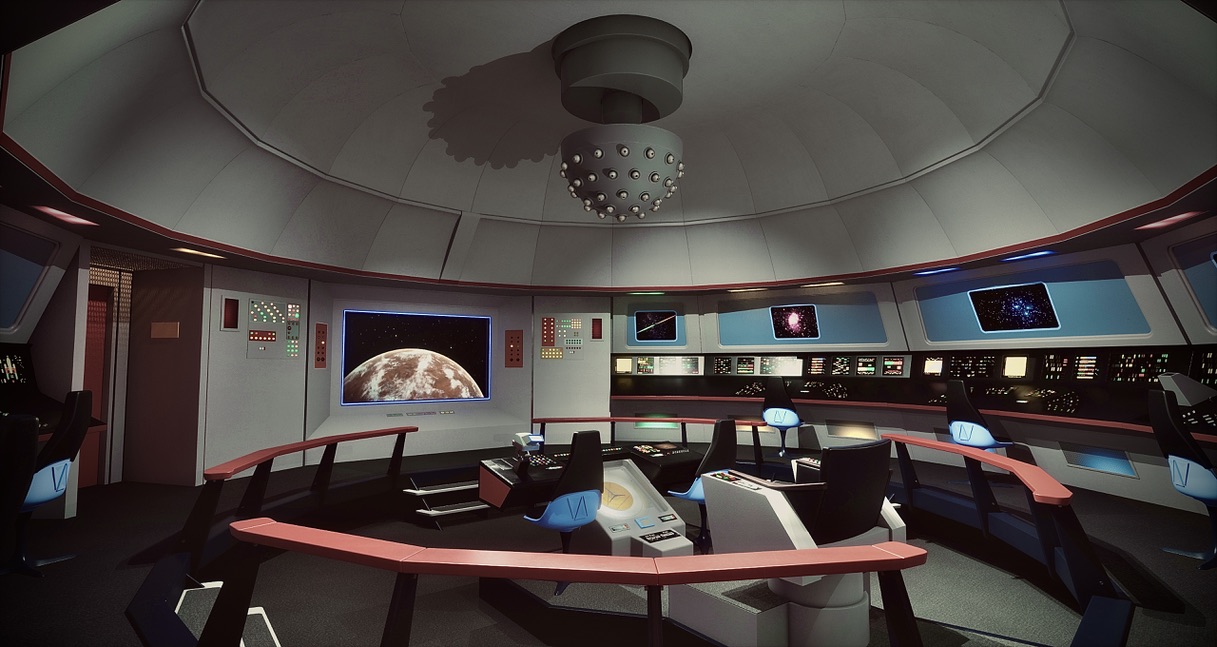 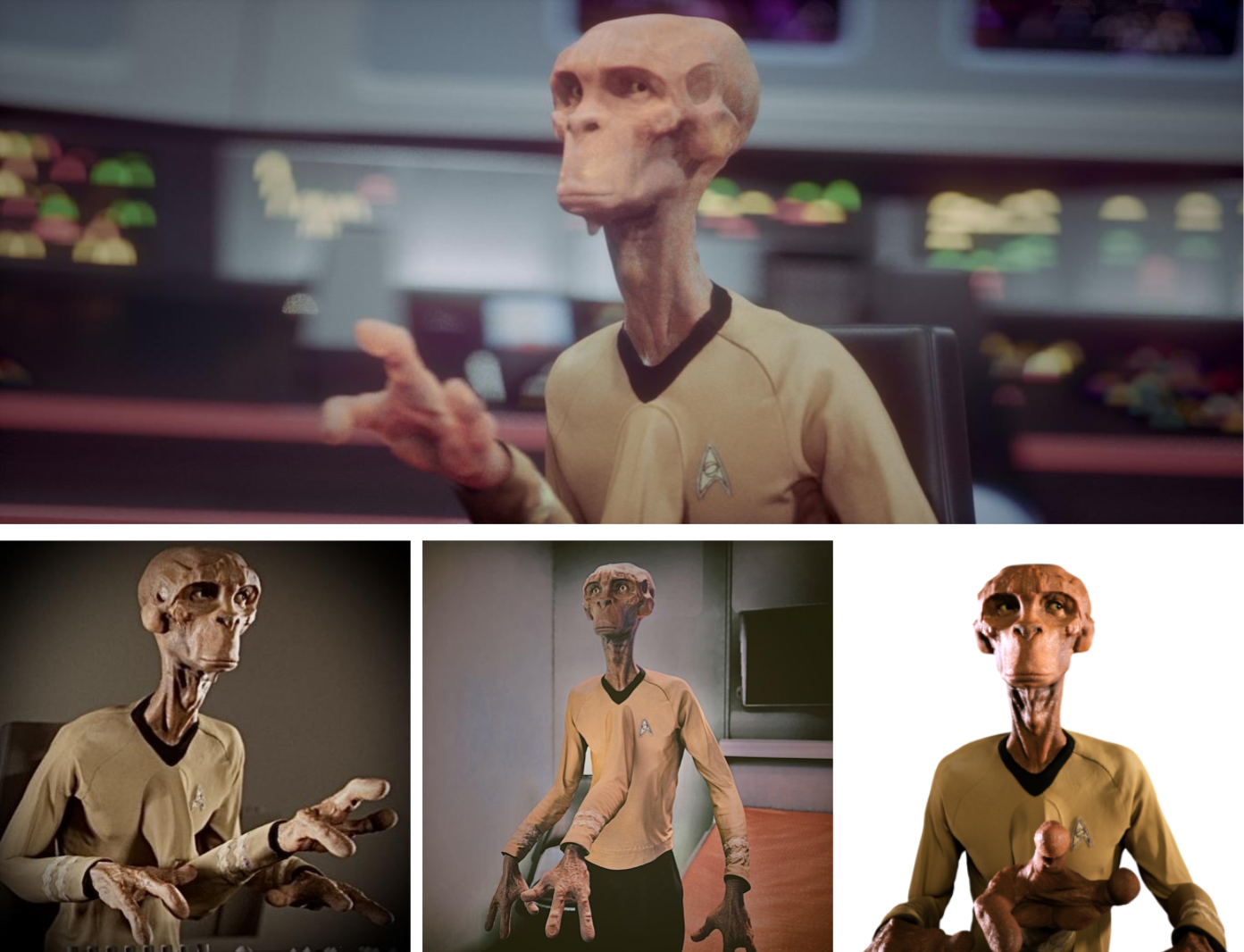 According to CEO and Co-Founder of OTOY, Jules Urbach, “For over a decade we have been collaborating with The Roddenberry Estate to preserve Gene Roddenberry’s legacy. Today’s release marks the first steps towards capturing Gene’s work in a new way that is fully immersive and interactive for future generations to experience Star Trek as if they were there in 1964.” Urbach added, “Gene Roddenberry saw into the future and projected a vision of the future where remarkable technologies affirmed the human spirit and ethical powers. Technological advances today in holographic imaging and real time graphics are making recreating his vision ever more possible and we are thrilled to work with the Roddenberry Estate to preserve Gene’s salient messages for humanity in the most authentic and open ways possible.”

According to CEO of Roddenberry Entertainment, Rod Roddenberry, “We started archiving materials from my father’s life over a decade ago hoping to preserve not just the iconic objects that made Star Trek such a successful franchise but more importantly the personal notes, internal documents, and never seen prototypes that fueled the various iterations of Star Trek. We wanted to provide a behind-the-scenes personal story about Gene and the evolution of the series, which has made such a profound impact on the development of humanity in the 20th century, inspiring so many around the world.” Roddenberry added, “With new real time and holographic technologies it is getting more and more possible to immerse new generations who didn’t experience Star Trek first-hand into my father’s universe, and we are thrilled to push forward on this new frontier in collaboration with 3D graphics pioneer, OTOY.”

The immersive experiences were accompanied by the release of three supplemental video logs providing archival behind-the-scenes testimony for the creation of the first Star Trek pilot, “the Cage”. The videos featured interviews inside fully recreated life sized Star Trek virtual production sets with Star Trek historians Denise and Michael Okuda; Chis Hunter, son of Jeffrey Hunter who played Captain Pike in The Cage; Sean Kenney who played Captain Pike in “The Menagerie”, and Robert Butler, director of “The Cage”. The videos feature fully recreated 3D models as well as archival photographs of “The Cage” production, set designs, costume designs and behind the scenes material drawn from thousands of documents that have been digitally archived by The Roddenberry Estate in collaboration with OTOY.

Videos and images of the The Roddenberry Archive immersive experience and behind-the-scenes video logs are available for the public to view online. These materials will be augmented with additional archive features throughout 2022. All of the Roddenberry Archive documents are preserved on the Render Network, providing an open blockchain digital library archive to reference all of Gene Roddenberry’s lifetime of works in an open format for future generations to access.